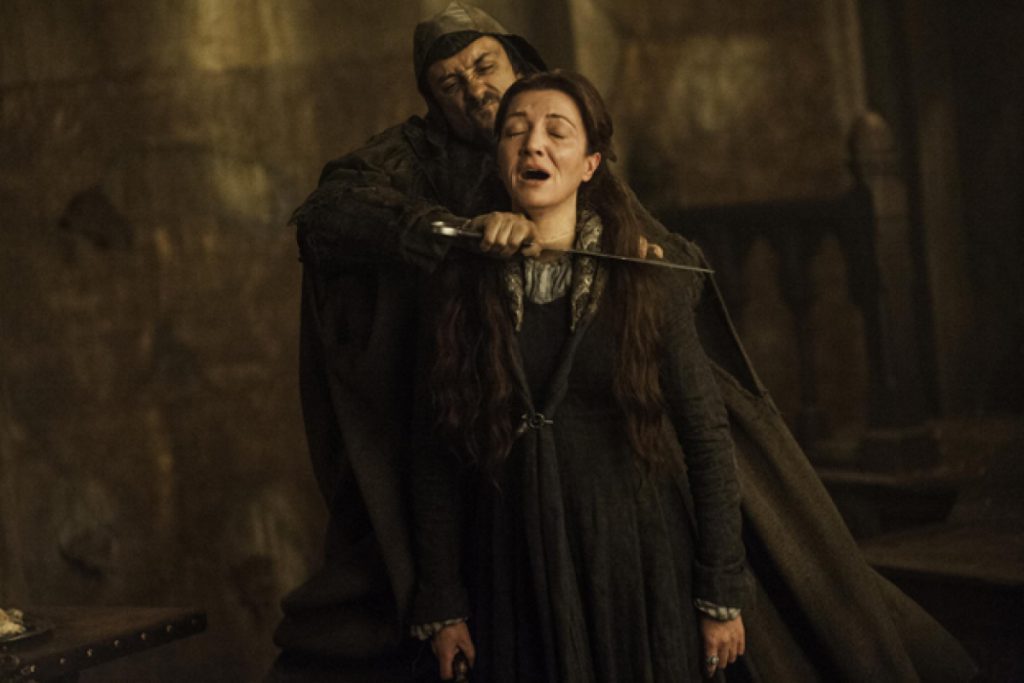 Game of Thrones ended more than a year ago with numerous memories from all seasons to cherish. It had a number of episodes that brought in unexpected twists, character developments and even foreshadowed which way the story was being propelled. Some moments in the series were totally unexpected like the death of Ned Stark who was earlier expected to be the main protagonist in the story. This moment had a huge implication on the overall story. Such is the ‘Red Wedding’ from Season 3 of Game of Thrones.

It was bloody, it was gruesome and it was horrific and many of us decided to refrain from attending wedding feasts for a while! But jokes aside, the episode was brilliant and at the same time shocking for many fans of Game of Thrones. It was unexpected that the wedding feast of Edmure Tully and Roslin would turn out to be something totally out of the box and would be remembered in Westeros as the infamous ‘Red Wedding’. Talking about real-life too, it was shocking enough for the actor Richard Madden too who revealed in an interview that after filming he was all covered in fake blood and had to board a plane immediately after filming.

Well, the story written by George R. R. Martin was brilliant with an unexpected turn and the revelation of the secret alliance of the Freys and the Lannisters. The cinematography of the ninth episode of Season 3 ‘The Rains of Castamere’ was brilliant too as many of the fans almost cried at the death of a few of their favourite characters in series like Robb Stark, Catelyn Stark, Talisa Stark and her unborn child and even the direwolf Grey Wind. But the gruesome ‘Red Wedding’ had a major implication on the overall story too. It was a major pivotal moment. Let’s elaborate on how the ‘Red Wedding’ commenced and how did it have an implication on the overall story and the characters especially on Arya Stark.

1. The Death of Robb Stark

After the death of Ned Stark, we all hated the Lannisters as they were behind the execution of the truly good character in Game of Thrones. Even before the death of his father, Robb Stark alongside the Northern houses had waged war against the Lannisters to get his father and two sisters back. And he was emerging victorious, especially at the moment when he successfully captured Jaime Lannister. He was a true leader and the commander of the Northern forces and even was crowned the ‘King in the North’ –  a title given up the Northern Kings long before the Seven Kingdoms were under the rule of the Targaryens.

After the death of Ned Stark, the young wolf had even turned too aggressive towards the Lannisters and was winning all the wars with a successful strategy. This continued until he reached the Twins and was offered an alliance with the Freys to cross the bridge and reach the South. But Robb now in love with Talisa, declined the offer and chose to marry her instead. This wasn’t approved by the Freys and the Northerners were tricked into getting Edmure Tully married to Roslin Frey in order to seal another alliance. But who knew that their wedding feast would soon turn into the ‘Red Wedding’.

Robb Stark met the worst demise any king in Westeros could ever meet. He was killed alongside his wife, unborn child and mother. The major shocker was when the final blow came from one of his own bannermen Roose Bolton with the phrase ‘The Lannisters send their regards’. The worst part was when his direwolf Grey Wind’s head was stitched to his corpse and he was paraded through the Twins with the Freys chanting ‘King in the North’.

2. The death of Talisa Stark and Robb’s unborn child

This episode of Game of Thrones truly crossed all boundaries, showing the murder of a pregnant woman and her unborn child. It was only the last season when Talisa from Volantis first met Robb Stark and fell in love with him. She was nursing the injured soldiers of the Northern army, though coming from a noble family. It was because of her the alliance between the Freys and the Starks was broken when Robb decided to marry her instead of one of Walder Frey’s daughter. Though the couple did very well and Talisa was even getting along well with Catelyn Stark until the ‘Red Wedding’ showed her being brutally murdered alongside her unborn child. This broke Robb as instead of leaving the tower upon being told to do so by Catelyn he decided to stay and glance at the corpse of his wife. Yet there still is hope for her in the books (Jeyne Westerling) unless George RR Martin decides to kill her off too!

3. The death of Catelyn Stark

Catelyn Stark was the loyal wife of Eddard Stark –  the warden of the North. Though after a couple of episodes in the first season, all fans had realised her cold behaviour towards Jon Snow whom she believes to be the son of her husband and his old love Ashara Dayne in the books. Catelyn totally hated Jon as he was a constant reminder to her of her husband’s infidelity. But she loved all of her five children. This was shown when she decided to travel all the way across Westeros to reach King’s Landing to tell her husband that it was Lannisters behind the murder attempt on Bran. Even upon realising that the alliance with the Freys was broken, she came forward to mend the broken ties by apologizing to Walder Frey.

The Freys seemed to be convinced yet this proved otherwise when they betrayed the Starks at the Red Wedding. She was the first to realise that something bad was coming when she heard the tune of the infamous ‘Rains of Castamere’. Though she tried to save her injured son by threatening Walder Frey, putting a knife to the throat of his wife, her attempts were gone in vain when her son was stabbed to death by her trustee Roose Bolton. The episode ended with her throat being cut by one of Walder Frey’s sons. It was truly emotional tow watch when she begged Walder to spare her son and let him walk away and he didn’t listen to her.

Yet, Catelyn Stark is still alive in the books. She was resurrected by Beric Dondarrion and goes on by the name of Lady Stoneheart, hanging any Lannister or Frey she thinks was involved in the murder of her son.

4. The Death of Grey Wind

Each time a wolf dies on Game of Thrones, the fans become upset. This wasn’t the first time a wolf was killed in the series. Grey Wind was one of the six direwolves adopted by the Stark children in the pilot episode of the series. First Lady, the direwolf of Sansa and then Grey Wind, it was hard for all fans to watch a direwolf die. We all know how Grey Wind’s skills in the battle were praised and he was a true source of power for Robb in defeating the Lannister forces in the first couple of seasons. Yet after the Starks and the Northerners were brutally murdered at the Red Wedding, the Freys decided to kill the poor direwolf for sport as well. The worst part was watching Arya Stark the direwolf being killed and then its severed head stitched to Robb Stark’s body who was paraded across the Twins on a horse.

Arya is first introduced in the series as a tomboy who wants to become a warrior like her father Eddard Stark. Where her sister Sansa Stark dreams of being a lady and marrying a high lord, Arya only dreams of going off to war and becoming a knight. Her dreams were shattered when she witnessed the execution of her father Ned Stark on false charges of treason and she decided to take the dark path of being an assassin. Her dark path was further propelled when she witnessed the Red Wedding. Though she didn’t actually see her mother being murdered by the Freys, she did see a dead Robb and his direwolf being shot dead by the Freys. This was another incident that pushed Arya to her limits into her being such a badass.

Initially training as a faceless assassin, she returned back to Westeros and emerged out as one of the serving girls at the Twins while the Lannisters and Freys celebrated their victory against the Tullys. She first baked his sons into a pie and upon meeting Walder Frey alone, executed him by cutting his throat as he did to her mother in Season 6. She later appeared in Season 7’s opening scene wearing the face of Walder Frey and poisoning the remaining Freys, uprooting the entire House root and stem!

The Red Wedding was truly a pivotal moment in Game of Thrones which pushed the story forward, giving many characters similar to Arya their arc. She avenged the brutal murder of many Northern Houses of Westeros. Not only for Arya, but this awesome episode also changed our perspective towards the entire series with nobody safe when playing the ‘Game of Thrones’!

So, which character’s death during the Red Wedding was the most shocking thing to watch for you? Tell us in the comments.

A Game Of Thrones tour – 5 must see locations in Dubrovnik