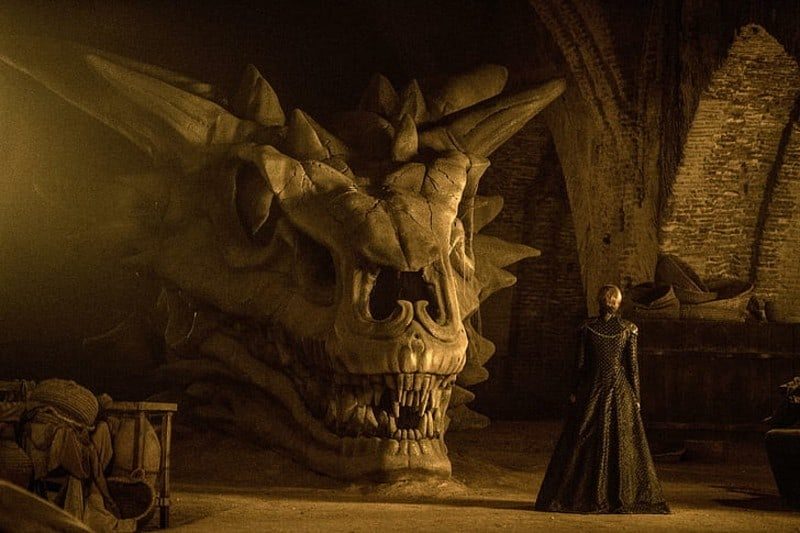 HBO just dropped the teaser trailer for Game of Thrones prequel House of The Dragon, and it broke the internet as soon as it was released. The highly anticipated prequel series has been HBO’s top priority for quite some time, and judging by the reaction of the fans that the teaser received, we can assume that they were right to do so. Though we witnessed several details about the upcoming show from the teaser, and of course the recent leaks, we didn’t get much information about the dragons, hardly any at all. But the teaser did give a slight hint about a certain dragon, Aegon The Conqueror’s famous ride Balerion the Black Dread might not be there in the series.

In the teaser, we captured a quick glance at what appears to be a dragon skull. Judging by the size of the skull, and the thousands of lit candles in front of it, we can assume it is the skull of Balerion, who was dead by the time of Dance of the Dragons in Fire and Blood novel.

The size of the skull is comparable, if not slightly bigger than the skull we have seen in Game of Thrones, stored in the Red Keep. Another fact that points towards Balerion’s absence is that HBO recently changed the description of House of The Dragon on their official website. Instead of the earlier synopsis that said the timeline of the show being set 300 years prior to Game of Thrones, it has now been changed to 200 years.

Have you noticed any other details in the teaser? Talk to us in the comments below!