We had previously reported that a full-length documentary about the making of Game of Throne’s magnificent last season is in the making. And now the trailer for it is also here. Game of Thrones: The Last Watch will be aired on HBO at 9 pm (US) on 26th May, exactly two weeks after the Season 8 finale.

The almost two-hour documentary has been directed by veteran documentary filmmaker Jeanie Finlay and has been made with an unprecedented level of access. The trailer gives us a peek into the table read for the final season with the entire cast, in-depth interviews with the cast and crew, and a hint of the technical depths and logistic heights that the wildly ambitious scale of the eight and final season of Game of Thrones demanded.

With just one episode to go before Game of Thrones ends forever, The Last Watch should give the fans a little something to wait for beyond 19th May.

Would you be watching the documentary? Tell us in the comments! Spoiler alert. As is tradition, HBO has released an ‘Inside the Episode’ feature of the latest episode, The Bells. For those of you who missed it, the episode was an absolute bloodbath. Daenerys all but signed her death certificate when she razed King’s Landing and the thousands of innocents in it to the ground. Once a beacon of hope and somewhat of a messiah, one wonders what brought about such a massive swing in her behaviour. In this feature, the showrunners tackle this question and several more regarding the other important scenes from The Bells. To sum things up:

Daenerys isn’t just the Mother of Dragons anymore, but also the mother of awful decisions. Showrunner David Benioff points out that Dany has finally reached her tipping point which is why she did what she did. In that, she annihilated King’s Landing. Most of her closest advisors have either died or they don’t think she’s all that great anymore and have switched teams. Combine that with the fact that Jon doesn’t really want to get down and dirty with her anymore. She’s all alone and that’s probably what got to her.

Dan Weiss touches upon how ‘The Bells’ had a lot of scenes that were shot from the perspective of the people down on the ground facing Dany’s wrath, instead of through her eyes.

“In most large stories like this, it seems like there’s a tendency to focus on the heroic figures and not pay much attention to the people who may be suffering the repercussions of the decisions made by those heroic people. We really wanted to keep our perspective and our sympathies on the ground at this moment ’cause those are the people who are really paying the price for the decisions that she’s making,” says Weiss.

Speaking about Jon, Weiss says that he is “in a kind of denial”, as shocked by Dany’s rampage (if not more) as the audience.

Amidst all the death and destruction, the episode did manage to give us a moment at the hands of the two people you’d least expect it to come from; Arya and the Hound. Once they get to the Red Keep which is slowly starting to crumble, the Hound tries to talk Arya out of going any further because death is guaranteed down that path.

“The Hound has genuinely come to have affection for Arya. I think he loves her as much as he’s capable of loving someone,” says Benioff.

This was definitely one of the most jarring episodes of the series in a long time. What did you think of it? The penultimate episode of Game Of Thrones aired tonight and it left everyone shocked. Daenerys, who has so far been a positive character, took a dramatic u-turn and ended up destroying King’s Landing, along with it’s citizens who were innocent. Characters from the show and fans were equally shocked when Daenerys turned into the Mad Queen and that was just one part of the episode. We finally got to see Cleganebowl, Cersei and Jaime’s death scene and lots more.

Now HBO has released a bunch of high-resolution photos from the latest Game of Thrones episode, “The Bells.” Take a look at the photos below: 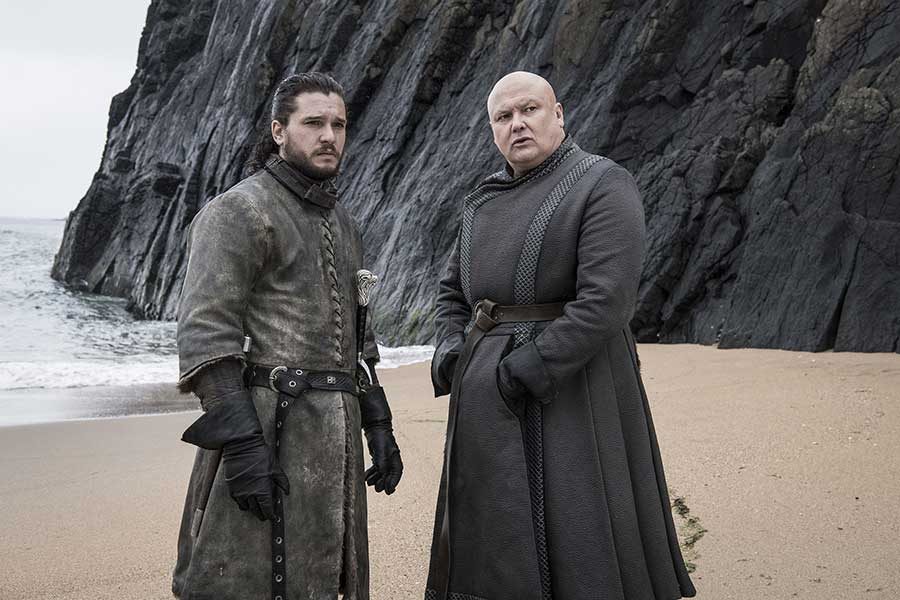 Varys offered Jon the Iron Throne but Jon doesn’t want to be the King of Westeros. Varys was plotting against Daenerys and Tyrion couldn’t let that happen and had to tell Daenerys about what Varys was doing. Which resulted in a fiery end for Varys. Daenerys made sure that the Iron Fleet and Cersei’s Dragon killing weapons were destroyed quickly. And she also made sure her forces could easily enter King’s Landing. However, things took a dark turn when Daenerys decided to burn King’s Landing. Tyrion just couldn’t what was happening in front of him. The Hound acted like a father figure and made sure that Arya survived the destruction. Euron made sure Jaime killed another King. Grey Worm wanted revenge and he got it. Game of Thrones Season 8, episode 5 “The Bells” brought us a lot of fire and blood, but it looks like the death run isn’t over yet. The preview trailer just dropped for Game of Thrones Season 8 episode 6, which is the series finale, and it shows a looming silence over King’s Landing. Before you proceed — SPOILER ALERT! Consider yourself warned. Daenerys Targaryen ended Cersei Lannister’s reign, and with it, almost all of King’s Landing. In the Game of Thrones series finale preview trailer, we see Daenerys looking out at a destroyed King’s Landing, with an eerie silence on the city. Take a look:

We don’t get to see too much of what’s coming. We only get to see Daenerys Targaryen, who is possibly still in her Mad Queen mode, and with the amount of death we have seen coming from her, it seems like there might be life in the show for just some more.