The world is a beautiful place, especially with the support of your family. Your family backs you up in hard times. They celebrate with you in times of joy. Game of Thrones’ cast and crew are a big family together. We, fans, are a part of it as well. On June 6, two of our beloved stars from the show celebrated their birthdays. Ellie Kendrick who played Meera Reed turned 31, and Aisling Franciosi who played Lyanna Stark turned 28 yesterday.

Ellie Kendrick was born in London. She attended Dulwich College Preparatory School, in Cranbrook, Kent, followed by Benenden School, also in Kent, and spent time with the National Youth Theatre. In October 2009, she took up a place to study English at the University of Cambridge. Kendrick debuted on Game of Thrones in Season 3 as Meera Reed, Jojen Reed’s sister. She went on to play the role well up to season 7, after which the character was never seen again. Kendrick has played roles in Waking the Dead (2004), Doctors (2004), In 2 Minds (2004), and the film An Education. She also played Anne Frank in the 2009 miniseries The Diary of Anne Frank.

Aisling Franciosi is an Irish actress. She is known for playing the part of Katie Benedetto in the RTÉ-BBC Two crime drama television series The Fall and for her role as Kate Crawford in the TNT series Legends. In 2016, Franciosi appeared in the HBO series Game of Thrones in the sixth season as Lyanna Stark and reprised her role in the seventh season.

Send your best wishes to the highly talented actresses in the comments below! 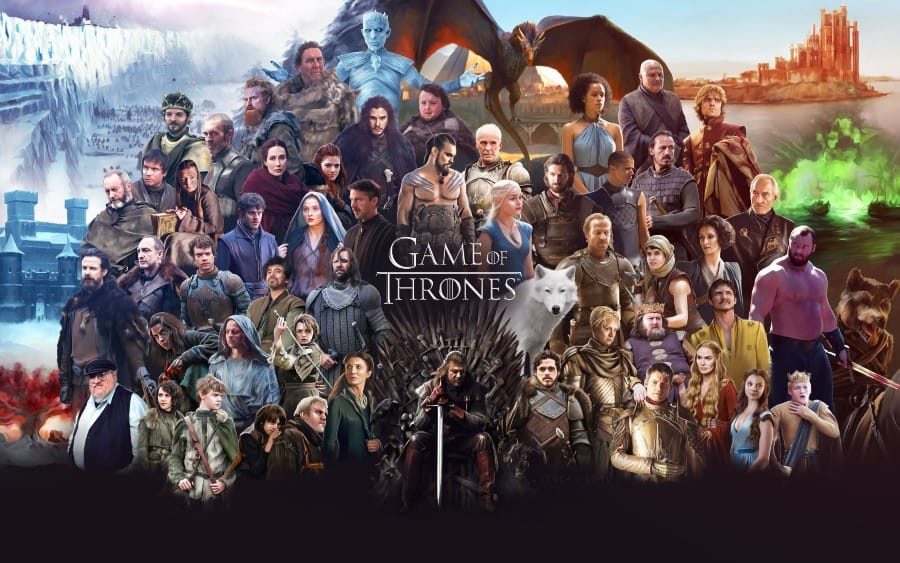 The 21st century has witnessed an unprecedented rise in science and technology. These advances have helped bring fantasy to life. The last decade saw the bar for quality TV shows getting raised to never-before-seen heights. Game of Thrones played a major role in raising that bar even higher. Scientists have researched the show’s incredible success, relating it to real life. Once again the series proved that it still rules the heart of the audience. Game of Thrones was voted as the Greatest TV Show of the 21st century by Digital Spy readers. Not long ago, Century Link compiled a list of the 25 most iconic Game of Thrones characters. They then looked at the Google Trends search volume for each over the past five years, breaking it down by states in the US.

The result was a reasonably authoritative and very entertaining graphic cataloguing which states search most for which character. In other words, which Game of Thrones character is beloved in each state. Quite surprisingly, Joffrey Baratheon is the most searched character in four different states. Although it may not be quite as surprising as finding out that only Massachusetts likes Jon Snow. Daenerys is the favourite in 17 states, including big ones like Texas, California and New York. All hail the Dragon Queen!

Also interesting that major characters like Cersei and Jaime Lannister are nowhere to be found on this list, and that Khal Drogo still comes in second to Daenerys despite only being on the show for one season. Littlefinger appeared in most search results in Hawaii, Indiana, New Jersey and West Virginia.

Do you find the list interesting? Tell us what you think in the comments below! Game of Thrones’ Hafthor Björnsson (The Mountain) and Eddie Hall have been long time rivals now, ever since they faced each other in the World’s Strongest Man championship. Their upcoming fight has been dubbed ‘The Heaviest Boxing Match in History’. Every competitive sportsman is involved in taunting their opponent to generate hype for their big event. And the Mountain is full of them for his rival, Hall.

Bjornsson continued his course into the boxing world with a tussle against Commonwealth Games Champ Simon Vallily in Dubai. Bjornsson and Vallily were said to have been “extremely respectful” of each other after trying to knock each other into oblivion. Although the same cannot be said of the rookie’s attitude towards Hall.

He said, “Eddie Hall, you better be training because I’m coming for you and I’m knocking you out,” promised blustering Bjornsson. “I respect you as an athlete but I’m going to knock you out. See you soon.”

“Simon was a good opponent for me and it was good to test my chin, as well as my ability to fight in the ring with a professional. He gave me some good shots that landed well, so thanks to him for coming here for this exhibition.”

Are you excited about the Heaviest Boxing match in history? Talk to us in the comments below! Finding a soulmate is one of the best things that can ever happen to someone. Especially in a world full of tragedies and problems we’re currently facing. Everyone needs that somebody who helps them find a connection to this world. Game of Thrones’ Sophie Turner is living the time of her life with her husband Joe Jonas. On Wednesday, Turner took to her Instagram Stories where she celebrated Pride Month with a special message.

“It’s mothaf—— #pride month babaaaayyyyyy,” wrote the 25-year-old in the now-expired post, as quoted by People magazine. According to the outlet, the star also included several Pride-themed stickers, such as “Bi Pride,” “Gay Pride,” “Move, I’m gay,” “Time isn’t straight and neither am I,” and a rainbow.

Many followers wondered if the post was the actress’s way of coming out as bisexual.

“Waiiiiit a damn minute.. is this Sophie Turner coming out as bi ?? Nothing but respect for the queen in the north,” one fan tweeted.

Waiiiiit a damn minute.. is this Sophie Turner coming out as bi ?? Nothing but respect for the queen in the north 💗💜💙 pic.twitter.com/2ih7mJWZUe

“You’re telling me Sophie Turner is bi and she married Joe Jonas instead of me??????” another joked.

you’re telling me sophie turner is bi and she married joe jonas instead of me??????

What do you think about Sophie’s post? Talk to us in the comments below!