So, this is it! The wait is almost over and the end is near. It’s been nearly 2 years since we last saw a new episode of our favorite series, Game Of Thrones. Now with the trailer for the final season out, we can barely wait for the series to be aired. The adrenaline rush is such that the mere mention of Game Of Thrones sets us into an animated debate as to how the series would progress and eventually end. But then, as much as we are all excited for the 8th season of Game Of Thrones, there is a silent corner in our hearts that is deeply saddened by that very fact — that we no longer will have a new episode to look forward to after this series ends. We are all going through a phase filled with mixed emotions. And, guess what? We aren’t the only ones! George R. R. Martin, the author of this amazing world is in the same boat as us, though for a slightly different reason. In a recent interview to Entertainment Weekly, he claimed to “have mixed feelings about that.”

He added, “It’s been an incredible ride. And almost all of it has been great. Obviously, I wished I finished these books sooner so the show hadn’t gotten ahead of me. I never anticipated that.” For the final season, Martin says, “It’s the end for a lot of people. It’s not the end for me. I’m still deeply in it. I better live a long time because I have a lot of work left to do.”

With bated breath and fingers crossed, we hope that the last two books of the series come out soon as well. But when it comes to the perfectionist that George R.R. Martin is, we might as well have a wait of another decade ahead of us before we finally say goodbye to the world of Westeros. Game of Thrones has been a wild ride for all of us, and over the years, us fans have gone overboard with some of our theories. However, imagine how much more intense the whole experience has been for the stars of the show. Obviously, the stars have their fair share of theories as well, and apparently, Emilia Clarke had some for the ending that didn’t even come close to the real deal. Read on!

Clarke was recently at the Goldene Kamera awards in Germany. They’re sort of like the BAFTAs of Germany, so many a Game of Thrones stars were present, including Nikolaj Coster-Waldau (Jaime Lannister), Jerome Flynn (Bronn), Hannah Murray (Gilly), and John Bradley (Samwell Tarly). Emilia did a sit-down to talk about Game of Thrones ending. Check out the full interview, below, including all the aforementioned cast members. Emilia comes in at 0:23 :

The interviewer asked her how close she got to guessing what happens at the end of the series, to which Emilia said “close-ish”, clearly lying. She spilled the real beans soon after:

“I didn’t see any of this coming. None of it. I didn’t spend much of my time thinking, ‘What is gonna happen?’ because I knew whatever I would think would be wrong.”

She was then asked about the “big battle sequence”, which we all know is coming. She replied:

“Every single part of this season… It’s not just, like, maybe three times bigger. It’s like 10 times bigger. Truly. Every aspect of this last season is just next level bigger than you think you’ve ever seen before.”

Looks like the final season will bring us some real horrors, possibly proving many of our theories wrong, and we can’t wait. What about you? Got any last minute theories? Talk to us in the comments, down below! 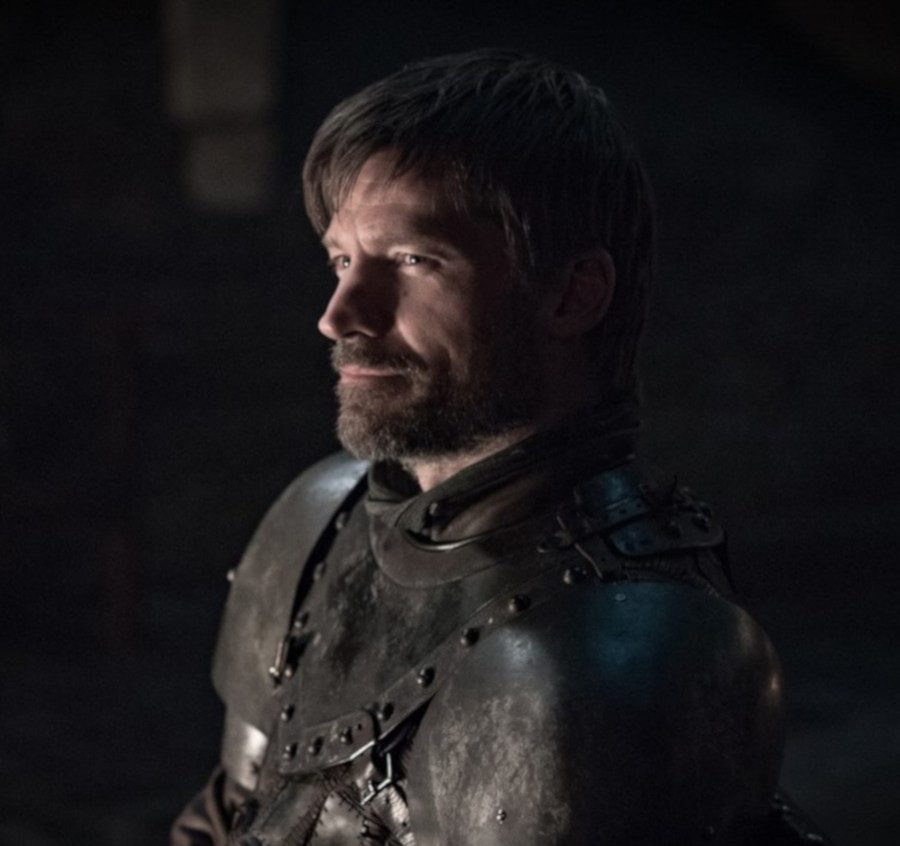 Game of Thrones season 8 is now less than 20 days away and both media and fan frenzy is reaching new heights. But there’s one thing at least we can be sure of, thanks to Nikolaj-Coster Waldau. Jaime Lannister gets a really beautiful resolution to all his trials by the end of the show – and also a paw.

In an interview with the Men’s Health Magazine, the Danish actor would have us believe, with a straight face, that Jaime’s maimed right hand finally grows back. But there’s a twist. We’ll let you hear it straight from the lion’s mouth:

Claw or paw, chances are this isn’t true. But he did reveal some other details about his last scene in another recent interview:

“I had a great last scene. It was absolutely beautiful. It was the perfect way to end, obviously I can’t tell you what the scene was … It wasn’t the final scene (of the series), but it was close to the end. It was shot at a beautiful location.”

That isn’t much, to be honest. But it does give us more room to speculate. For example, by ‘really beautiful’ location does he mean some new place in the North? Also, if the scene wasn’t the last scene of the series, does that mean Jaime doesn’t survive the season? Questions, questions.

Jaime Lannister has always been a character of many layers, and the Danish actor has played him with finesse and depth. In his words,

“I find Jamie so interesting … The core of this guy is that he does what he does in the name of love. He’s a complex guy.” And that is the sort of emotional honesty that Waldau has tried to bring to his portrayal of Jaime’s many questionable decisions; for example his relationship with twin sister Cersei Lannister. In his words, despite the taboo,

“It’s one of the few true love stories in Game of Thrones—Jaime is dedicated to this woman.”

Will Jaime’s fate bring him back to Cersei again, this time as her doom? Many fans have theorized Maggy the Mage’s  ‘Valonquar’ prophecy about Cersei’s death refers to Jaime, as ‘Valonquar’ means ‘little brother’ in High Valyrian and Jaime is, in fact, a few minutes younger than Cersei. Well, Waldau certainly isn’t revealing anything. He’d rather talk about what happened behind the camera.

“At this point, I had seen quite a lot of colleagues wrap, so I had seen a lot of tears, beautiful speeches, and I knew what to expect. I didn’t expect to be emotional, so I don’t know what happened, I had allergy, there was something in my eye.” Waldau smiles.

Chances are, we will have things in our eyes too when the season gets to the point. The Stark sisters have gone through an uphill journey in the Game Of Thrones series, being loved and hated for the role they played. The actors who play Stark sisters, Maisie, 21 and Sophie, 23, met during the audition process for GoT way back in 2009, when they were 12 and 13 respectively. They have been quite close (as opposed to their antagonist on-screen chemistry). In a recent interview to Glamour, Sophie said, it was practically love at first sight, email addresses were exchanged and, “Honestly, we’ve been best friends ever since.” ‘Mophie’, as they are adoringly called by their fans, have practically grown together on the sets of Game of Thrones; they even have matching tattoos! Maisie said that “Sophie knows too much about me to not be my friend.”

The Stark sisters have had their share of troubles even in real life. Sophie knows she can depend on Maisie for support unflinchingly, “Maisie is definitely my protector and I’m hers, too,” Sophie said. “I know if anything happened – especially if it was on Game of Thrones, which it never, ever would – she’d go crazy and protect me . . . Maisie is my strong home.”

An amused Turner added that “People always think Maisie and I are a couple,” Turner said. “I mean, I am obsessed with her, so you never know. She’s my drug. I’ve got an addiction to Maisie Williams. I actually stalk her hashtag on Instagram!”

Growing up in public eye was quite difficult for both the girls, but Maisie was grateful to have Turner by her side, “I can’t tell you the amount of times Sophie said, ‘Go to therapy,’ before I actually did,” Williams remembered. “She really helped me through some messy break-ups and some friend break-ups. Whenever I’m like, ‘I need help! This is bigger than anything I can sort out on my own,’ Sophie is my point of call. I think therapy is so important. You should absolutely speak to someone, even if in your head you go, ‘Yeah, I knew that!’” In agreement with what Maisie had to say about their friendship, Turner added, “We’ve helped each other through a lot of mental-health problems, especially around body image. She’s been my crutch in that, and I’ve been hers because it seems everything she goes through, I go through. You know when girls are together a long time, their periods sync up? It’s like our emotions and personalities sync up, too.”

Apart from being there for each other, they also had a lot of fun keeping everyone on the set of Game of Thrones on their toes. “Even though we play sisters, we tried to sneak a kiss into every scene we did together to freak everyone out a bit,” Turner said. “It kept them on their toes; making sure they were following the script.”

And Williams thinks that they might not even be cast together for the same project for some time now. “Everyone on set is sick and tired of us being so loud and laughing so much. I don’t know if we’ll work together again. I don’t know if people would cast us in something together because we are so known for these two characters. Game Of Thrones will be some of the funniest days of my life.”

When asked about what’s coming in Season 8, the Stark sisters maintained their silence!