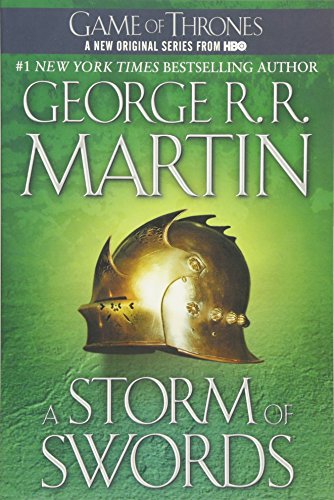 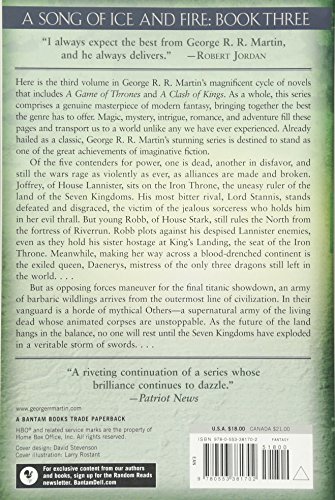 THE BOOK BEHIND THE THIRD SEASON OF GAME OF THRONES, AN ORIGINAL SERIES NOW ON HBO.

Here is the third volume in George R. R. Martin’s magnificent cycle of novels that includes A Game of Thrones and A Clash of Kings. As a whole, this series comprises a genuine masterpiece of modern fantasy, bringing together the best the genre has to offer. Magic, mystery, intrigue, romance, and adventure fill these pages and transport us to a world unlike any we have ever experienced. Already hailed as a classic, George R. R. Martin’s stunning series is destined to stand as one of the great achievements of imaginative fiction.

A STORM OF SWORDS

Of the five contenders for power, one is dead, another in disfavor, and still the wars rage as violently as ever, as alliances are made and broken. Joffrey, of House Lannister, sits on the Iron Throne, the uneasy ruler of the land of the Seven Kingdoms. His most bitter rival, Lord Stannis, stands defeated and disgraced, the victim of the jealous sorceress who holds him in her evil thrall. But young Robb, of House Stark, still rules the North from the fortress of Riverrun. Robb plots against his despised Lannister enemies, even as they hold his sister hostage at King’s Landing, the seat of the Iron Throne. Meanwhile, making her way across a blood-drenched continent is the exiled queen, Daenerys, mistress of the only three dragons still left in the world. . . .

But as opposing forces maneuver for the final titanic showdown, an army of barbaric wildlings arrives from the outermost line of civilization. In their vanguard is a horde of mythical Others—a supernatural army of the living dead whose animated corpses are unstoppable. As the future of the land hangs in the balance, no one will rest until the Seven Kingdoms have exploded in a veritable storm of swords. . . .
Is George R.R. Martin for real? Can a fantasy epic actually get better with each new installment? Fans of the genre have glumly come to expect go-nowhere sequels from other authors, so we’re entitled to pinch ourselves over Martin’s tightly crafted Song of Ice and Fire series. The reports are all true: this series is the real deal, and Martin deserves his crown as the rightful king of the epic. A Game of Thrones got things off to a rock-solid start, A Clash of Kings only exceeded expectations, but it’s the Storm of Swords hat trick that cements Martin’s rep as the most praiseworthy fantasy author to come along since that other R.R.

Like the first two books, A Storm of Swords could coast on the fundamentals: deftly detailed characters, convincing voices and dialogue, a robust back-story, and a satisfyingly unpredictable plot. But it’s Martin’s consistently bold choices that set the series apart. Every character is fair game for the headman’s axe (sometimes literally), and not only do the good guys regularly lose out to the bad guys, you’re never exactly sure who you should be cheering for in the first place.

Storm is full of admirable intricacies. Events that you thought Martin was setting up solidly for the first two books are exposed as complex feints; the field quickly narrows after the Battle of the Blackwater and once again, anything goes. Robb tries desperately to hold the North together, Jon returns from the wildling lands with a torn heart, Bran continues his quest for the three-eyed crow beyond the Wall, Catelyn struggles to save her fragile family, Arya becomes ever more wolflike in her wanderings, Daenerys comes into her own, and Joffrey’s cruel rule from King’s Landing continues, making even his fellow Lannisters uneasy. Martin tests all the major characters in A Storm of Swords: some fail the trial, while others–like Martin himself–seem to only get stronger. –Paul Hughes