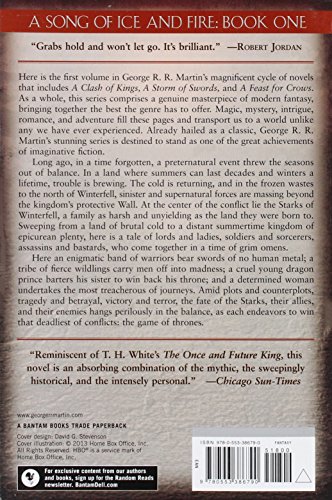 Long ago, in a time forgotten, a preternatural event threw the seasons out of balance. In a land where summers can last decades and winters a lifetime, trouble is brewing. The cold is returning, and in the frozen wastes to the north of Winterfell, sinister and supernatural forces are massing beyond the kingdom’s protective Wall. At the center of the conflict lie the Starks of Winterfell, a family as harsh and unyielding as the land they were born to. Sweeping from a land of brutal cold to a distant summertime kingdom of epicurean plenty, here is a tale of lords and ladies, soldiers and sorcerers, assassins and bastards, who come together in a time of grim omens.

Here an enigmatic band of warriors bear swords of no human metal; a tribe of fierce wildlings carry men off into madness; a cruel young dragon prince barters his sister to win back his throne; and a determined woman undertakes the most treacherous of journeys. Amid plots and counterplots, tragedy and betrayal, victory and terror, the fate of the Starks, their allies, and their enemies hangs perilously in the balance, as each endeavors to win that deadliest of conflicts: the game of thrones.

Here is the first volume in George R. R. Martin’s magnificent cycle of novels that includes A Clash of Kings and A Storm of Swords. As a whole, this series comprises a genuine masterpiece of modern fantasy, bringing together the best the genre has to offer. Magic, mystery, intrigue, romance, and adventure fill these pages and transport us to a world unlike any we have ever experienced. Already hailed as a classic, George R. R. Martin’s stunning series is destined to stand as one of the great achievements of imaginative fiction.
Readers of epic fantasy series are: (1) patient–they are left in suspense between each volume, (2) persistent–they reread or at least review the previous book(s) when a new installment comes out, (3) strong–these 700-page doorstoppers are heavy, and (4) mentally agile–they follow a host of characters through a myriad of subplots. In A Game of Thrones, the first book of a projected six, George R.R. Martin rewards readers with a vividly real world, well-drawn characters, complex but coherent plotting, and beautifully constructed prose, which Locus called “well above the norms of the genre.”

Martin’s Seven Kingdoms resemble England during the Wars of the Roses, with the Stark and Lannister families standing in for the Yorks and Lancasters. The story of these two families and their struggle to control the Iron Throne dominates the foreground; in the background is a huge, ancient wall marking the northern border, beyond which barbarians, ice vampires, and direwolves menace the south as years-long winter advances. Abroad, a dragon princess lives among horse nomads and dreams of fiery reconquest.

There is much bloodshed, cruelty, and death, but A Game of Thrones is nevertheless compelling; it garnered a Nebula nomination and won the 1996 Locus Award for Best Fantasy Novel. So, on to A Clash of Kings! –Nona Vero